Please email any comments or corrections to blog@geographika.net

The aim of this page is to summarise the available MapServer security options in a single location, and to act as a rough checklist when reviewing MapServer deployments. I’ve tried to link to the official documentation as much as possible, and to make updates to these sections where appropriate.

Securing a MapServer deployment can be implemented at three levels - the web server-level, the MapServer application-level, and at the Mapfile-level. There are plenty of resources on how to securely configure servers, so the focus of this page is on MapServer specific security steps. 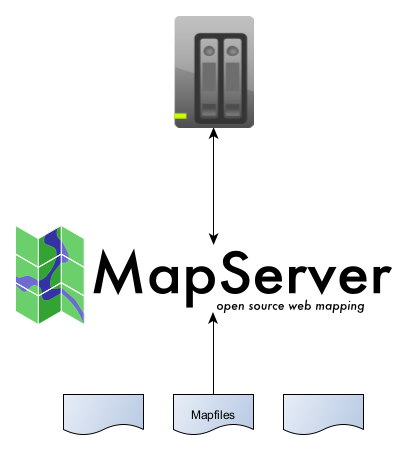 My experience with large MapServer deployments has typically been on Windows servers, using data from MicroSoft SQL Server, so there is a focus on those aspects in this article.

General information on securing web servers, such as using firewalls, request filtering, disabling ports etc. is outside the scope of this article. As MapServer is a CGI application (it runs as an executable natively outside of the web server), particular attention should be made on how best to secure CGI/FastCGI programs on the server.

The account used to run MapServer will require read-access to at least the following:

MapServer only serves data, rather than allowing editing, which limits security risk to data leaking out, rather than data being deleted or corrupted. However, whilst MapServer does not support data updates, it does requires write-access on the server for the following cases:

Temporary files are created by MapServer in cases such as when applying external SLD files to layers, creating zip files for downloads in an OUTPUTFORMAT, and saving temporary WMS and WFS files from other servers.

Once the web server is secured, further security can be applied at the MapServer application level.

Over the years MapServer has been subject to several external security audits. The codebase is open source which also means it is regularly scanned by tools looking for security holes (by both good and bad actors). These reviews sometimes raises CVEs (Common Vulnerabilities and Exposures). The full list of MapServer CVEs can be found on CVE Details. Any widely used software CVEs, so having CVEs is not a sign that MapServer is insecure (for example see CVEs for ArcGIS Server).

As noted on the Reporting Bugs page, security and vulnerability reports should not be submitted as GitHub Issues but instead please sent via email to mapserver-security nospam @ osgeo.org (remove the blanks and “nospam”).

From a 2021 MapServer Security Advisory

The MapServer CGI, by default, will happily attempt to process any mapfile it is asked to. While this might be desirable in a development environment, it is not acceptable for public-facing installations.

See the Limit Mapfile Access page for how to limit access. There are also further details in MS RFC 56: Tighten control of access to mapfiles and templates

MapServer has a number of Environment Variables that can be set to limit unwanted use of MapServer. Below is a brief summary of the security-related environment variables:

Several of the above environment variables rely on regular expresssions.

Some people, when confronted with a problem, think “I know, I’ll use regular expressions.” Now they have two problems.

Regular expressions are hard to write (at least for myself), and hard to test. I’d recommend setting explicit MAP files where possible using the new CONFIG file discussed below. In addition different builds of MapServer can use different regex libraries, for example Windows and Linux builds, with subtle differences. This goes against the idea of Mapfiles being fully portable between systems.

If your application however does need to use Mapfiles from many different locations, or with dynamic names, I’ve found https://regex101.com/ to be incredibly useful when working with regular expressions, in particular its debugging option.

Make sure this configuration files is not in a publicly accessible web folder!

Without providing a valid path in MAPSERVER_CONFIG_FILE, or without a config file at the default location of ${install dir}/etc/mapserver.conf MapServer will refuse to run.

The MAPS section of a config file allows a list of keys and Mapfile locations which can be processed by MapServer. If there is no requirement for processing Mapfiles from different locations, or dynamic names then listing all relevant application Mapfiles in this section can greatly reduce the risk of loading malicious Mapfiles.

Using keys and environment variables avoids exposing the path to your Mapfiles (which in turn gives away the OS of the server, and possible folder structures).

A key new feature of the config file is that MapServer LAYER PLUGINs can now be restricted. For example until MapServer 8.0 a MS SQL layer would use the following settings:

MapServer will then load this DLL to process the layer. If the DLL is compromised, or the PLUGIN location modified to point to a different DLL then this opens up a security risk.

The new configuration file now limits which DLLs can be loaded by MapServer, and the PLUGIN accepts a key rather than a file location:

Now the layer in the Mapfile can be configured using:

Whilst the DLL could still be compromised, or the CONFIG file modified to point to a different DLL, there is no longer a risk of an arbitrary Mapfile being processed by MapServer referencing a DLL that may not even be on the same machine as MapServer.

The final level for hardening a MapServer deployment is within Mapfiles themselves. Some suggestions are given below. In a production environment Mapfiles should ideally be set to read-only to avoid modifications.

As Mapfiles are plain text, it is insecure to store details such as passwords in them. MapServer includes a utility program msencrypt to encrypt sensitive data.

MS RFC 18: Encryption of passwords in mapfiles notes however that this is more obfuscation than secure:

As of MapServer version 8.0 the MS_ENCRYPTION_KEY environment variable can be stored in the new configuration file. Make sure the key file is not in a location where it can be accessed via a web request!

An example of an encrypted connection string is shown below:

Ideally an alternative connection method would be used which does not rely on storing a password, encrypted or not, in a Mapfile. Microsoft SQL Server can use Trusted Connections - so called because SQL Server trusts the credentials provided by Windows, rather than SQL Server authentication which requires a user name and password to be sent for each request.

IP restrictions can be handled at the firewall or server-level, but can also be implemented in Mapfiles. See MS RFC 90: Enable/Disable Layers in OGC Web Services by IP Lists for details. Mapfile restrictions are probably better suited for user groups within a network rather than to restrict publicly available services.

IP restrictions are implemented by setting a layer’s ows_allowed_ip_list metadata value. For example:

Note this can also be set at the map-level, and specific IP addresses or ranges blocked:

If an application only requires certain OWS services to be used e.g. WMS is required, but not WFS, then these can be restricted. This can be done at both the MAP and LAYER levels using *_enable_request metadata keys. See the WMS Server docs and WFS Server docs.

MapServer is now over 25 years old, and existed well before any OWS services were implemented. Prior to OWS all access to MapServer was by controlled using different “modes”, passed to MapServer as a parameter. These are documented on the MapServer CGI Controls page.

These are all still available today, however if they are not used then it is prudent to disable them to reduce the attack surface of MapServer.

To disable the CGI modes the ms_enable_modes metadata option can be set:

Use the asterisk “*” to specify all modes and a preceding exclamation sign “!” to negate the given condition. Further details are included in as part of RFC 90, in the Disable the stock CGI operations section.

This is not something built-in to MapServer, but there are a few different approaches on restricting which users can access which layers in a Mapfile:

MapServer can be prone to DoS attacks - when the server is overwhelmed with requests, or hit with requests that trigger processor-intensive responses. Overloading the server can also occur without malicious intent when applications don’t limit the amount of data or frequency of requests from users. Many of these attacks should be blocked by server-level security, but it is good practice to limit how much data a user can request.

A few options are listed below:

Thanks for taking the time to read this article. If you have any further suggestions, best-practices, or notice any errors in the above, please let me know via blog@geographika.net